Built in the 1890’s by Irving Gill, commissioned by Anna Held Heinrich. Something special about this home is the room in the back overlooking the ocean, it was shaped like a boat and became known as “Noah’s Ark”.

Located at Black’s Beach this home was built in 1965 by Dale Naegle. If you want to look at the mushroom house, be prepared for a 2-mile round trip hike!

The Salk institute is an architectural marvel, acclaimed by architecture critics as one of the world's boldest structures. Sitting on the coastal bluffs of La Jolla it rests 350 feet above the Pacific Ocean!

Built by Irving Gill in 1909, this building is the oldest continuously used oceanographic research buildings in the United States. It proudly takes on the title of being the first building of the Scripps Institute of Oceanography, which happens to be the nation’s very first oceanographic institute being founded in 1903.

Explore the history and beaty of La Jolla during a stay at The Shoal La Jolla Beach! For special rates and packages, visit www.theshoallajolla.com

Popular posts from this blog

The Benefits of Ocean Water 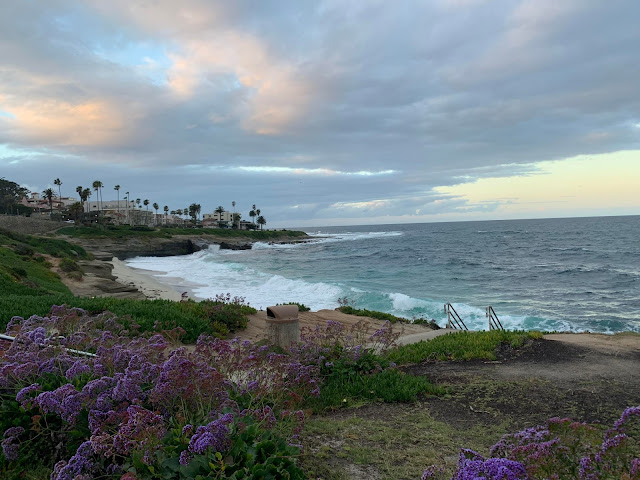 The Benefits of Ocean Water   Have you ever noticed how nice your skin feels after a day at the beach? Or how you feel so relaxed? I started to wonder why that is, so let's look into it! The ocean is very rich in minerals like potassium, iron, zinc, sodium, magnesium which all individually have great health benefits with anti-inflammatory properties. That is why ocean water is a great natural treatment for sensitive skin, such as eczema-prone skin. Swimming in cold ocean water also activates temperature receptors that are under the skin which release hormones like endorphins, cortisol and adrenaline. The release of these hormones have been linked to the release of dopamine and serotonin. So basically, ocean water makes your outside AND inside happy and healthy! After learning so much about the benefits of ocean water, I’ll definitely be visiting the ocean more! Luckily, The Shoal La Jolla Beach is just steps away from these ocean benefits a
Read more

October 13, 2020
HALLOWEEN IN LA JOLLA AT THE BIRCH AQUARIUM HAUNTED AQUARIUM REMIX   Halloween may be different this year, but it can still be fun! At the Birch Aquarium in La Jolla they are hosting a month long event called the “Haunted Aquarium Remix”. This event starts October 1 st  and ends on October the 31 st . The aquarium is known for their “spooky science fun” and will continue that tradition outdoors with “new animal encounters” and activities made for the children from ages 2-10. Stunning outdoor spaces such as the “Tide Pool Plaza”, “Smargon Courtyard” and the “Education Courtyard” will be utilized so everyone can have fun safely. Children are encouraged to wear costumes when coming to visit, they’ll receive a “Discovery Booklet which includes self-guided explorations tied to Haunted Aquarium Remix activities”. Here they will learn more about and even be able to touch some of these “spooky” critters of the sea such as small sharks, seaweed and even sea spiders! So come have f
Read more